Far off from daily hustle and busy life, a trek to Triund offers you an escape into the lap of nature where you can enjoy greenery and beautiful mountain views. Triund is a small hill which is a part of Dharamkot. This was used as a migratory route in the British era by the shepherds of Kangra and Chamba.It is at the height of 2.828 meters and is located at the foot of the Dhauladhar range. It is 18 Kms away from Dharamshala and 9 Kms away from McLeodganj. It is not a hard grade trek as it takes approximately 5-6 hours to reach the top. The easiest trek route for Triund is : McLeod Ganj – Dharamkot – Galu Temple – Triund. The trail to Triund is approximately 7 km from Dharamkot via Galu Devi temple. Galu Devi temple is at a distance of 3-4 hours from Dharamkot. From the temple, it takes approximately 3 hours to reach Triund. The initial half of the trek is a gradual incline and is easy to climb. However, the last 2 km from Snowline Cafe involves a steep climb all the way till Triund. 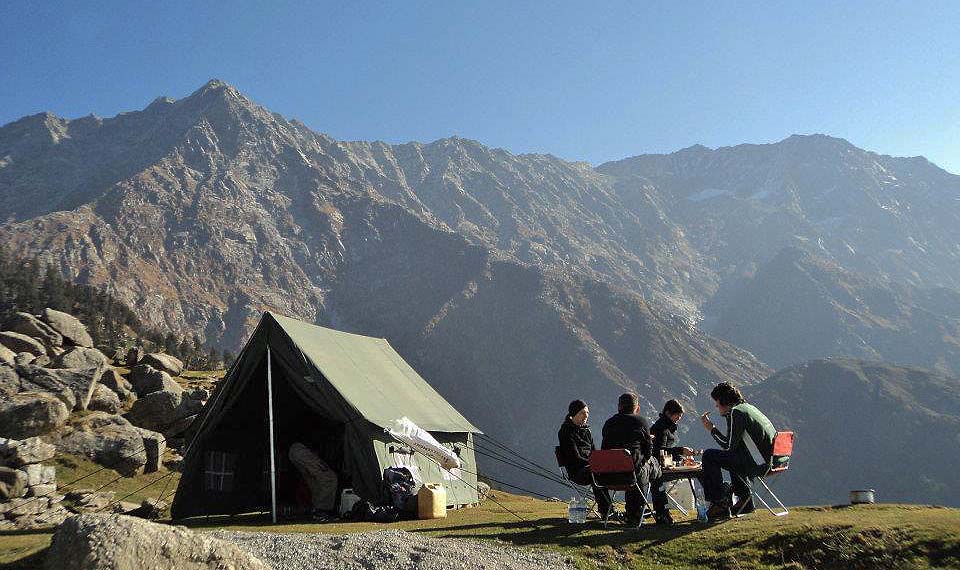 There are few stalls selling tea and refreshments on the way, so you can take small breaks during the trek and rest for a while. This makes the trek easier for people who are trekking for the first time.Though food and water are sold along the trek, do bring plenty of water and snacks along. The trek has a firm and well defined path but due to the presence of snow, the trek becomes slightly difficult during the winters. Once you reach the top, the view of the meadows and snow capped mountains is breathtaking. 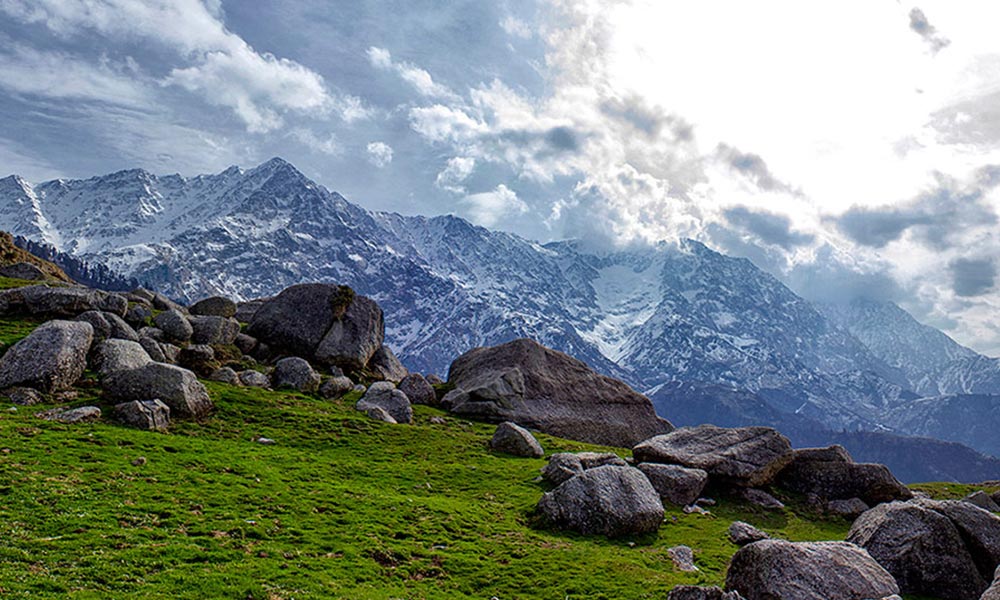 The best time for Triund trekking is March to June and September to December. Most suitable time for trekking is during the spring and summer as the weather and temperature remain very suitable. Summer is a great time to visit in order to escape from the harsh and scorching heat of the cities. During summers, the weather is pleasant in the daytime but nights are cold. The temperature may vary from 25 to 5 degree celsius. You must not forget to carry some pullover, sweatshirt or light jacket to save yourself from cold night. During winters, the temperature is very cold and it can go down to -9 degrees during the nights. The night air is really chilling because of the huge drop in temperature. Be prepared and with heavy woolen clothes, skull cap to protect your neck and ear from extreme cold. Do not use a pair of brand new shoes for trekking. Use the ones that you have already used at least for a month so that they are easy on your feet. Also, carry a raincoat (during monsoon), water bottle, flashlight, lip guard or moisturizer and sunglasses as they may come in handy. Trek is open year-round, though it is a little difficult during the winters as it lies covered in snow from December end to Mid February. During monsoons, extra caution is required as the trails are bit slippery due to moss and algae that grow around small rocks that lie in the trek. 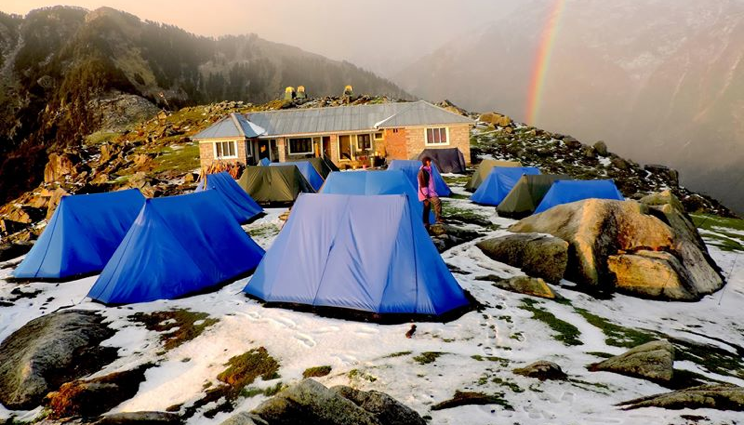 Nature has so much to offer. Take off some time from your hectic days and jobs and throw yourselves in the arms of nature. Walking through the enchanting forest of Oak, Deodar, Pine and Rhododendron trees and watching snow covered Dhauladhar Himalayas with gust of wind running through your hair as it dries all your sweat is such a divine feeling. Watch the orange glow in the snow as the sun kisses the Himalayan peaks in the morning and the star lit clear night sky. Hear the birds chirp and sing, watch them fly and hover across the sky. Hear the wind, feel the breeze and see its presence as it sways the leaves, twigs and towering pines. Nothing is more satisfying than climbing a hill across the conifer forest trail with steep slopes and reach a place where you can feel moving above the cloud.

Hi! I am Neha. I like cooking, writing and travelling. I love life and more than anything in the whole wide world, I also love clicking photographs. I believe it’s always the right time for a dance party and live your life in passion. 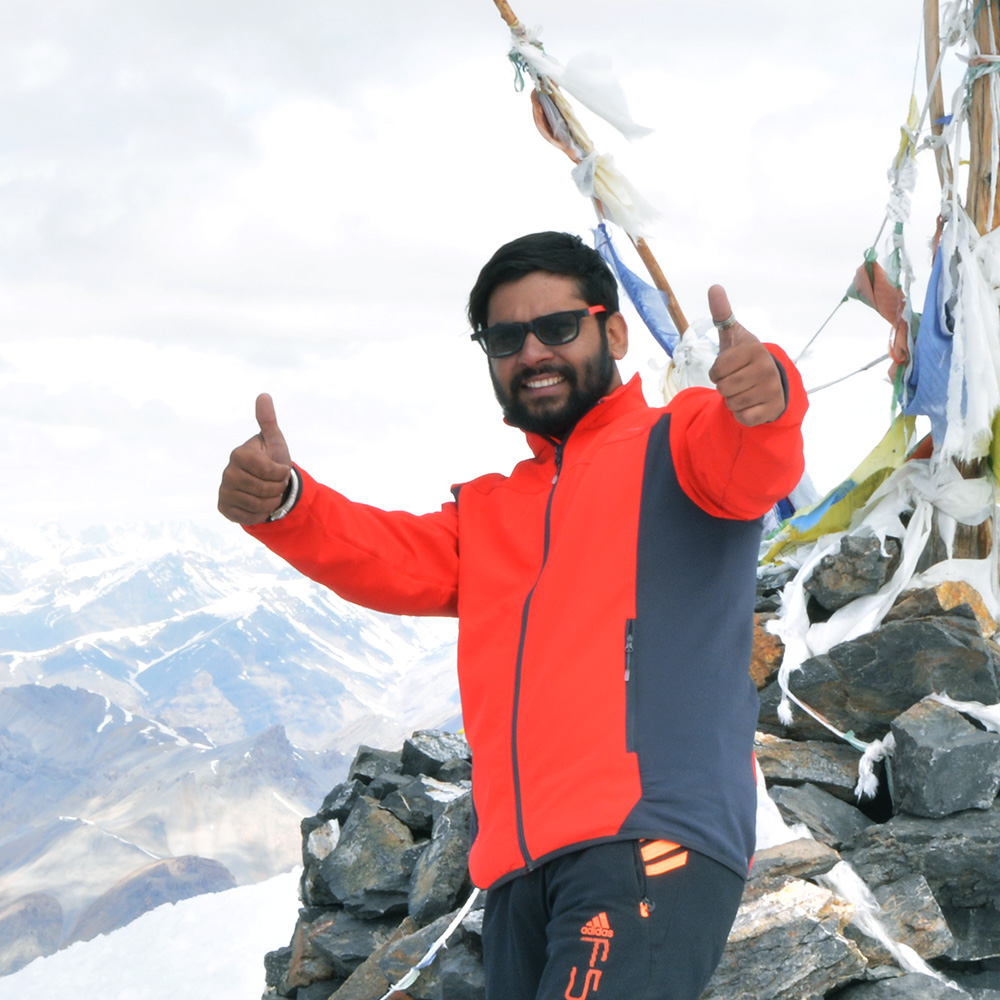 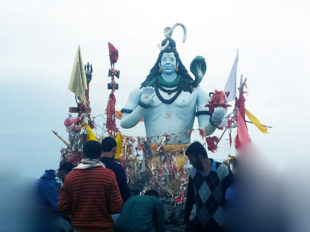 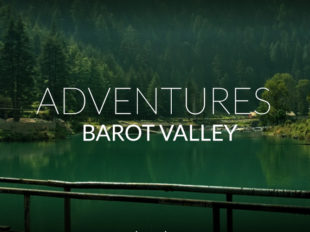